In Understand OAuth2 section, we said that, after a successful authentication, you get two different tokens: an access token and an ID token.

The ID token is a value containing all the basic information about the authenticated user, like its id, email and profile information from user fields. For security and convenience, this data is encoded as a JSON Web Token (JWT).

Before showing how to enable its encryption, let's explain how JWT work and why encryption is interesting.

JWT is a widely-used standard to secure and encode JSON data. For example, let's take the following JSON data, which is typical of what you could find in an ID token generated by Fief:

If we encode this data as a JWT, here is what it looks like:

At first, we could think this data is encrypted and can't be read without a key. Actually, it's just a standard base64 encoding and it's very easy to decode. If you want to see it by yourself, you can copy-paste the value above into the JWT.io debugger: you'll see the data decoded! 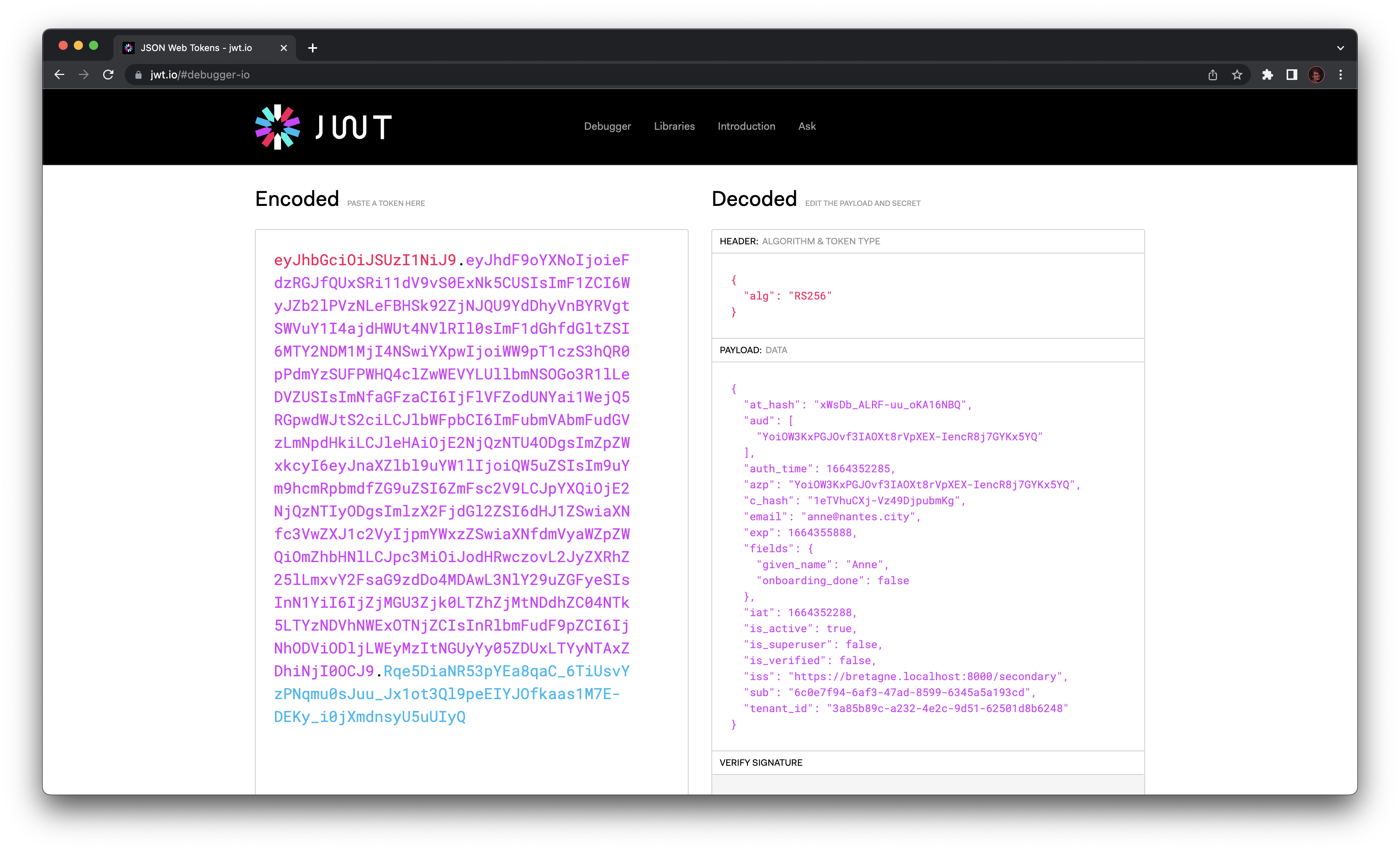 So, why do we bother with JWT then? If you look closely at the debugger, you'll see there are three parts in the JWT, separated by a dot:

The signature is actually the main benefit of the JWT. It's a cryptographic technique allowing us to ensure the data has not been tampered or replaced by a malicious user: we're sure this is legitimate data generated by the Fief server.

Schematically, here is the creation process of a signed JWT:

Ok, so we have our ID token as a JWT, and we can check the authenticity of the data. However, as we shown, the data can be easily decoded by anyone who could read the ID token.

Since the ID token may contain personal information, like email, postal address or phone number, it may pose confidentiality issues.

Fortunately, JWT accept a wide range of cryptographic algorithms, including assymetric encryption. In a nutshell, those algorithms use a pair of keys, a public one and a secret one. If we encrypt the data with the public key, it can only be decoded using the private key: the data remains private if we don't have this key.

However, there is a problem: the data is now encrypted, but it's not signed anymore. In this case, a malicious user could easily tamper or replace the data, encrypt it with the public key and return it to us. We could decrypt it, but we couldn't be sure it's authentic data from the server.

The solution is actually simple: take the encrypted JWT and wrap it in another JWT using a signature algorithm! This technique is called nested JWT. Hence, we have this process:

Now, we have the best of both worlds: we can check the authenticity of the data while preserving its confidentiality. This is what we do when we enable ID Token encryption. 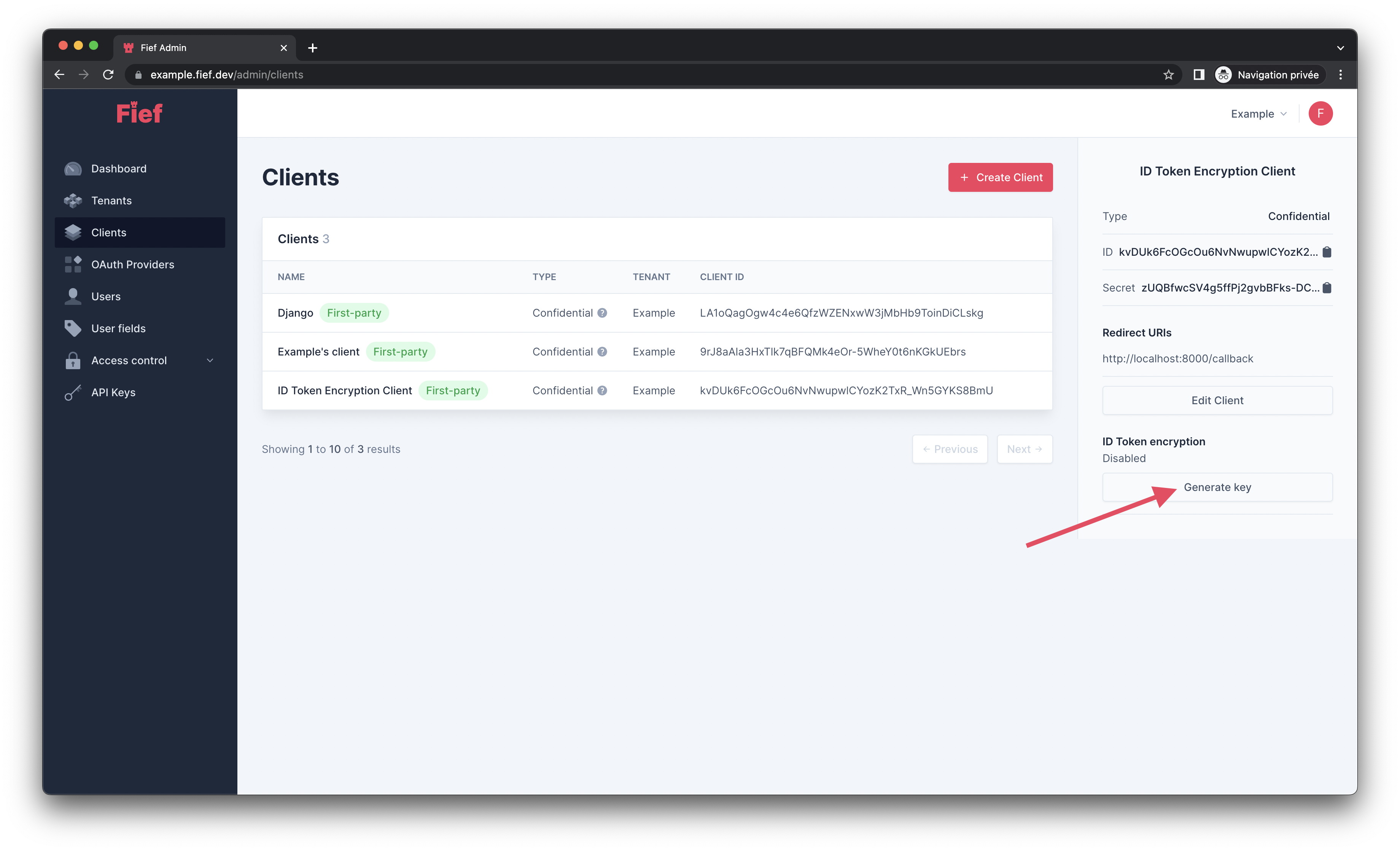 Fief will generate a key pair for you. Then, a modal will open with your private encryption key. For security purposes, Fief will only keep the public one. It means that only you will be able to decrypt the data in the ID Token. Keep it safe and secret! 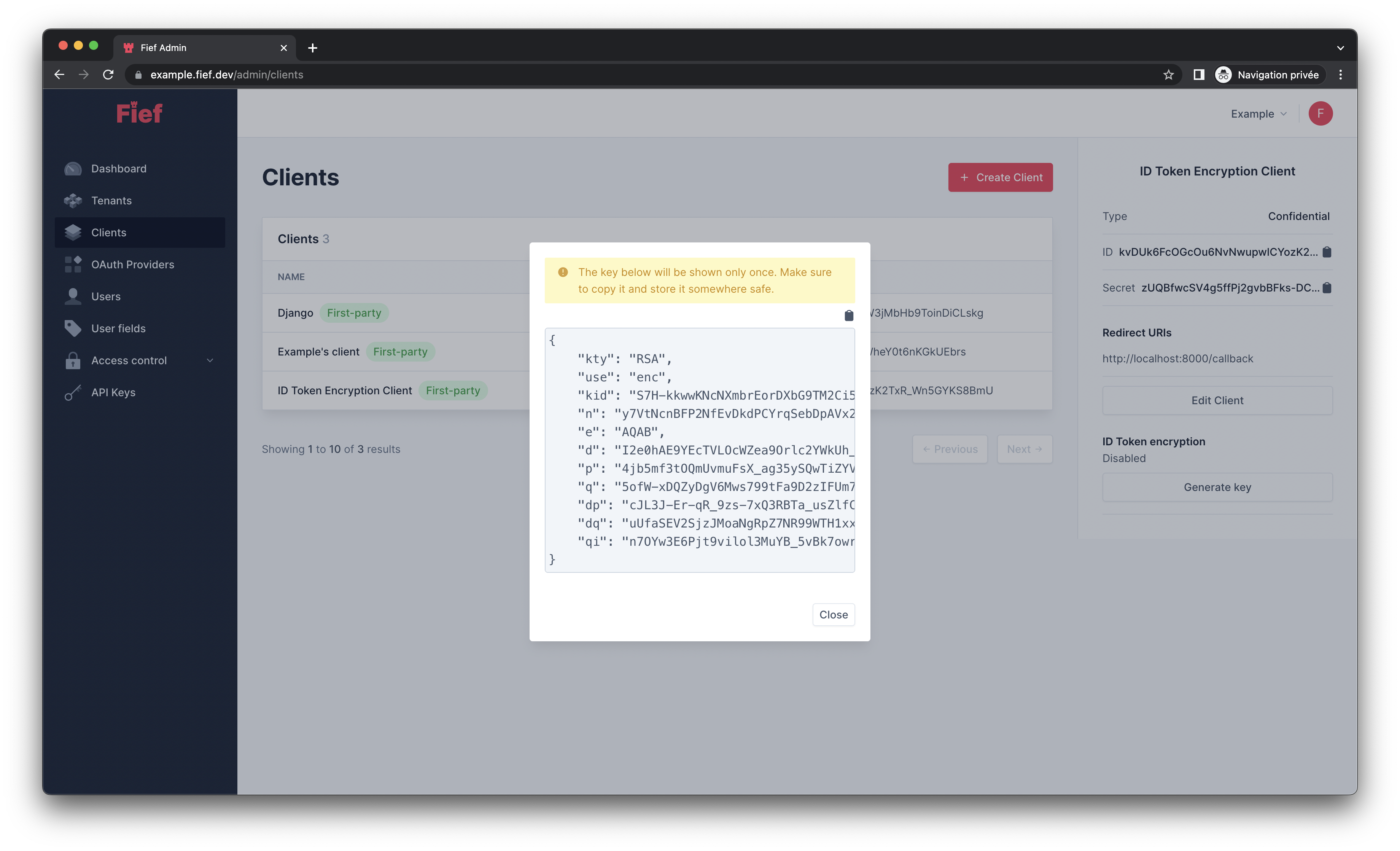 You need now to configure your application so it can decode the ID Token. If you use our official libraries, all you need to do is to pass the key you copied above when initializing the Fief client:

The client will then take care of decrypting the data for you.

In other languages, use a JWT library to decrypt the ID token:

Draw inspiration from our Python implementation

If you need an example of how to do this, you can draw inspiration from our Python implementation.

If you need to reset your encryption key because it was compromised or because you lost it, you can click on the Regenerate key button in the client details to generate a new one. 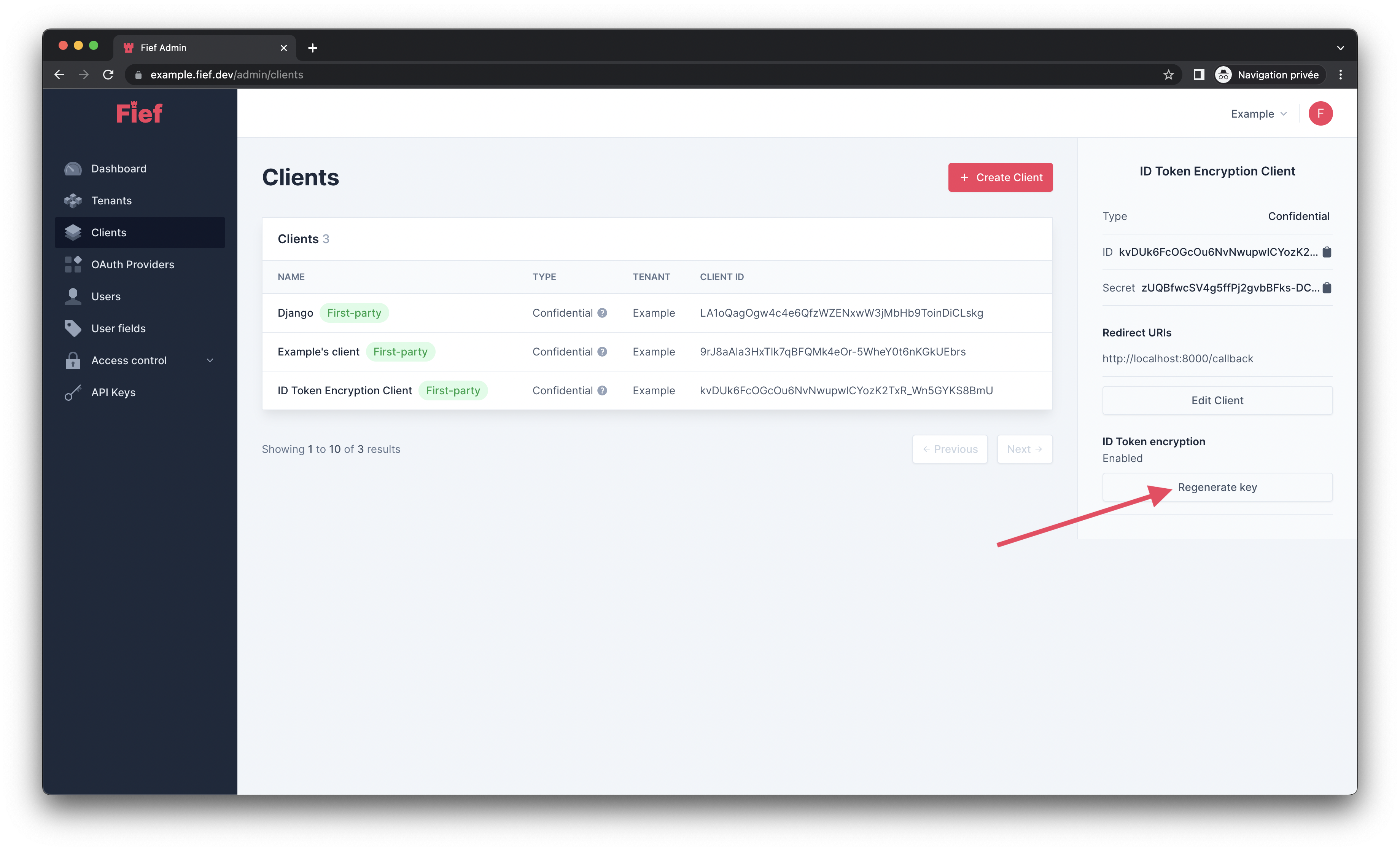